So, my Novi Stars dolls finally came, much to my delight. However, that delight was soon quelled when I took a good look at Ari Roma, sans a left arm. I'm not kidding. She was missing her left arm!! 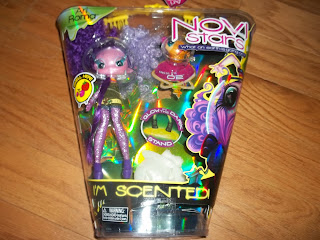 
I immediately went to the Amazon site and opted for a new Ari Roma doll to be shipped out, with both arms intact, in exchange for me returning the defective one. I am highly impressed with their service. I didn't even have to leave my house. The UPS guy picked the return package up at my front door. My new Ari Roma came with a sticker that said it was inspected, which apparently meant that they wanted to make doubly sure it was complete this time around. I'll get around to reviewing Ari later on. Right now, I am going to review Mae Tallick.

Here is Mae Tallick in her packaging. 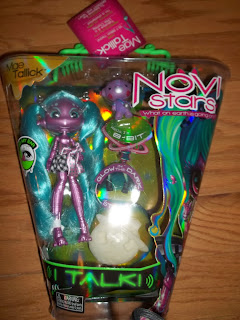 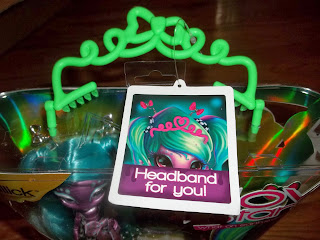 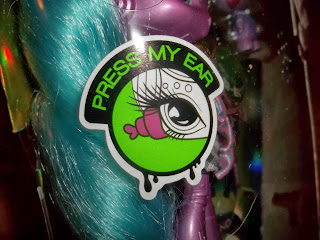 The package states that her special feature is that she "talks". I'll get to that later. Right now, I want to focus on other aspects of the packaging. The package is a trapezoidal shape and has cardboard inserts under a clear transparent window that state Mae's name, how to activate her feature, her pet's name, 8-Bit, and that the stand she comes with glows in the dark.  The handle on top of the packaging is actually a headband, however, its not my style so I won't be using it.The left side (or right side if its facing you) of the packaging shows Mae's concept art. 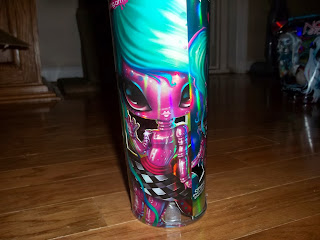 The eyes on this concept art look to be a different color than the doll's actual eyes, but again, I'll get into that later when I open the doll up and get a better look. I also notice that her bang is swept to one side in the concept art, rather than divided down the middle as in the doll. The back of the packaging has another picture of Mae's concept art, complete with a hair clip that looks suspiciously like that of the Monster High skull logo. I guess they scrapped that little addition when they saw the similarities as the doll is notably without one. There is also a brief list of factoids about Mae next the the concept art, and under that, concept art of the other 4 basic Novi's released at that time: Ari Roma, Una Verse, and Alie Letric. I found that the packaging has a somewhat metallic sheen to it so taking pictures without getting reflections is next to impossible, so bear with me on that one. 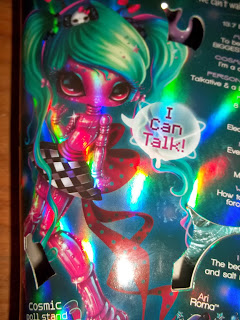 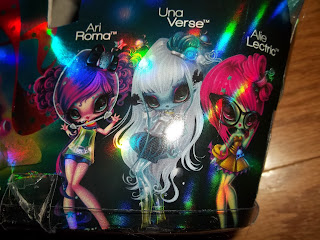 Alright, enough of admiring the lovely packaging, let's tear into this beaut, shall we? The package has a clear top and a bottom in ovoid shapes, attatched to the main packaging with pull tabs. They simply pop out and the top and bottom slide out. 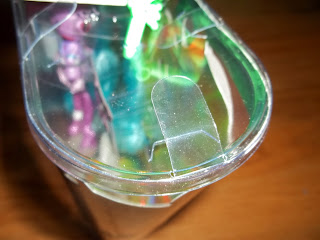 After removing the top and bottom, I found that the remaining packaging was actually one solid piece that was folded in 3 separate parts, then the two ends were folded onto one another, with the clear window on top. 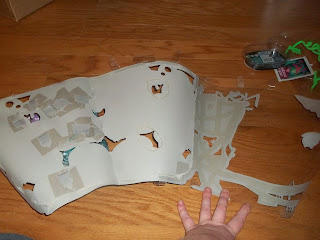 The doll herself was securely sealed in, as if the manufacturers were afraid of her coming to life a la Toy Story or something and escaping her packaging. I mean, seriously, is MGA afraid of their dolls coming back to their headquarters and attacking them? Anyways, after much blood sweat and tears, I got the doll out. The first thing I noticed is that her hair is a wig, and its attached to the plastic insert that holds the doll with not one but 3 plastic ties.  The doll is also secured to the plastic backing by a lot of tape and clear rubber bands. You might notice that I didn't get all of those sneaky little buggers off in the following pictures of her leg, which brings me to the tag on her left calf. Its just a disclaimer of sorts. It comes off easily enough with scissors. 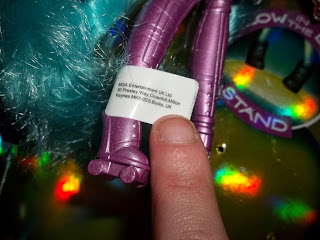 Finally freed from her packaging, this is what Mae looks like. I don't get why they made her left pigtail into two seperate curls and her right pigtail into only one. It bugs me. So, I decided to twist the two curls together after I was done taking pictures of Mae for this review. She comes with her stand, which is custom molded to her built in roller skate shoes so no other Novi can use it, and 8-Bit, which is adorable. 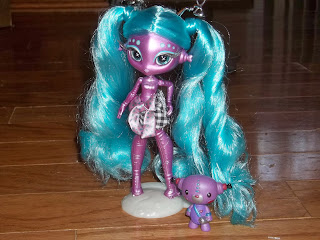 Mae is startlingly under dressed compared to the other Novi's, with only a pleated, black and white checked skirt adorned with a large pink and blue polka-dot satin bow.  The skirt has a false panty inside, made of white satin, that prevents it from riding up the doll's torso. 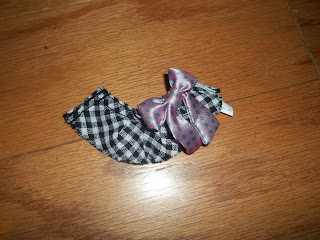 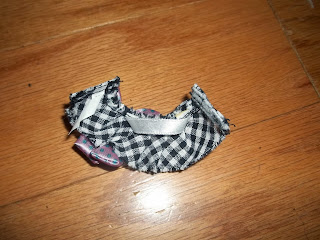 However, I don't find it that alarming myself, as her chest is molded with  rivets and seams that indicate that she is indeed, a robot girl, made from paneling. The paneling goes is also molded on her arms and legs. Sorry, I didn't get any good pictures of the detailed molding. Her body is made of a metallic magenta/purple color and has a shimmery sheen to it.

Mae's eyes are absolutely gorgeous, with turquoise colored glitter irises and a pupil with a skull and cross bones motif in the gleam. Her eye lashes are actually real, and are covered in a silver glitter glue. Her lids are colored in silver and turquoise eyeshadow and her eyebrows are simply 3 silver dots rimmed in the same turquoise as her eyeshadow. Her lips aren't molded, rather just simply painted on, and are a lighter pink than her face. It gives hr a rather odd profile. 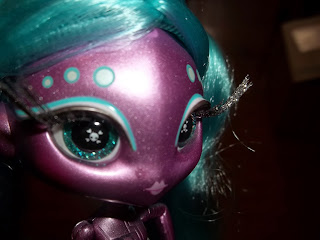 Mae has 5 points of articulation. Her neck, which is a ball a socket joint, her shoulders, a hybrid ball and socket/swivel joint, and her hips, which are strung with elastic. Thankfully, the elastic is of much better quality than the first wave Monster High dolls, which have been notorious for loosing their legs almost right out of the box.When her legs are manipulated, they instantly snap back into place, so getting pictures of Mae doing the splits is next to impossible. Sorry. 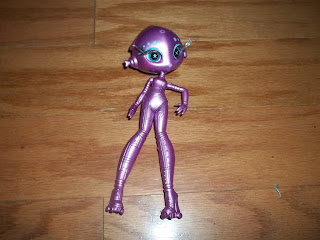 Mae's hair is acutally a wig, which is rooted in a clear plastic cap, noticably without a peg. Thankfully, Mae has heart shaped protuberances on either side of her skull that allow for the wig to stay put. Her wig comes adorned with silver antenna that are shaped like bows. 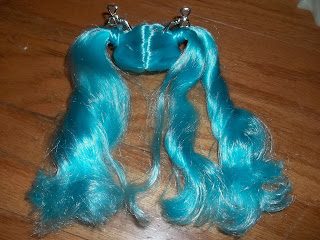 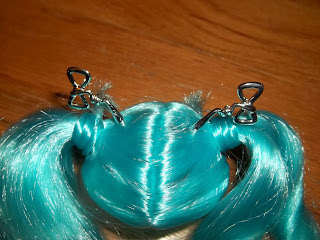 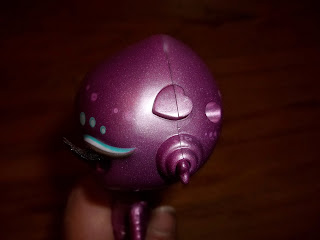 As stated before, Mae comes with her pet, 8-Bit, which resembles a teddy bear of sorts. He looks cute and endearing with his little nose and big soft eyes. His back has a hole in it to accommodate the peg in the Energy Pod play set, which I'll get to in a later review. 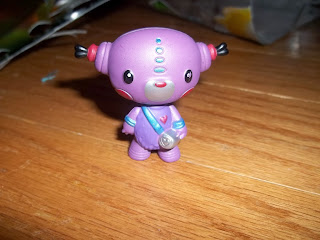 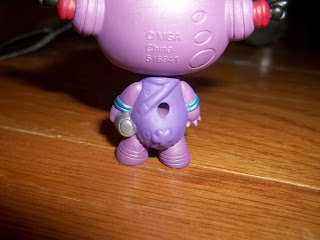 The glow in the dark stand that Mae comes with vaguely resembles a planet. It has custom molded spaces for Mae's roller skate feet, like I said before, however, it doesn't really fit her feet too well. Her left foot pops out almost all the way.I also found that if she isn't placed firmly into it, she'll topple over. She can't stand on her own, as her head and wig make her way too top heavy. 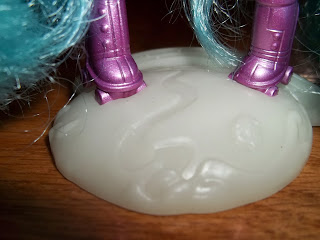 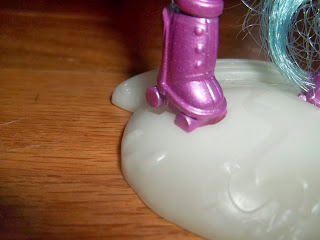 Mae comes with a talking feature, which you can see in action here, in Suine Hallock's video review.


To accomidate her talking ability, she has a speaker on the back of her head, and a screw on cover for a battery compartment, so you can change her batteries. The compartment's screw takes a smallish Phillipp's head screwdriver, and presumably houses a pair of 1.2v batteries. 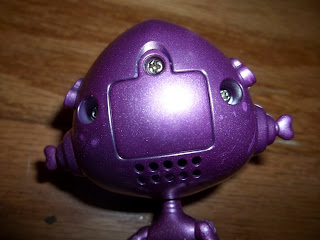 All in all, I say I like this doll. She is very cute, although her lack of articulation might sway off some potential buyers. She is more or less a figurine to collect, rather than a solid play doll. 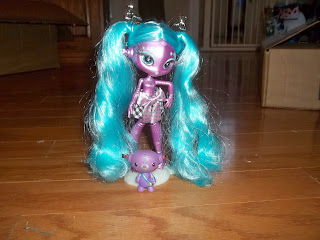 I apologize for this entry being so short, but since its my first, I think I can sort of get away with it.

Anyways, hello! I'm Beth and I guess my doll obsession started when I was a little girl. I have always loved dolls. I guess you could say that I've never really grown out of them.  So, I've decided to blog about my love for them.

I tend to lean more towards fashion dolls. I don't know why. I just do. And that brings me to my first ever review for this blog. I don't have a doll ready to review just yet, but expect a few in the mail. What dolls are they exactly? Why, none other than the "Novi Stars" line by MGA. I'd link you to their official site, but I don't know how much longer it'll be up. You see, due to poor sales, the dolls might be discontinued. I am always sort of sad to see a doll line run its course and then be pulled from store shelves, however, there is a silver lining. Each of the "Novi Stars" dolls are on sale now! So, I've decided to snatch a few up while I can.

Its also my birthday on Wednesday, so why not treat myself?

I bought Mae Tallick, Alie Letric, Ari Roma, Una Verse, and Nita Light (which comes with that "Energy Pod" playset). I'll talk more about the doll line when I they come, mostly because its kind of difficult to do so without having them here. I will, however, leave you with a splash image of the dolls' official artwork, on the off chance you've never seen them before and am wondering what the heck I am talking about.


Of course, there are a few more characters than I mentioned, and I might get to those ones later, but my main focus is getting through the first 5 released.

Again, I apologize for the short entry, but I promise that my reviews won't be nearly this way.

Artchic528
I'm just your average girl, trying to make it in this crazy world.